How should we tell a story in a film? Narrative can be linear, cyclical, spiral, fragmented… you name it. Adam Wong who directed The Way We Dance will conduct the workshop with a small group of participants, scrutinize their works, and give them tips about how to play around with storytelling!
8–9/3/2014 | 11am – 5pm | Eric Hotung Studio, Hong Kong Arts Centre | Conducted in Cantonese 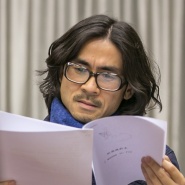 Adam Wong studied at Ying Wa College for his secondary school. While he was studying Fine Arts at the Chinese University of Hong Kong, he travelled as an exchange student to the University of Iowa, USA, and made use of the courses and facilities there to start making short films. His shorts Fish (97), Ah Wai & Murphy (99) and Glowing (00) were awarded at ifva. After the 311 tsunami in Japan in 2011, he created with his partner the disaster-relief short film Friends which was screened at the Osaka Asian Film Festival on the one-year anniversary of 311. In 2012, adapting a true story of a barista girl, Adam wrote and directed the short film Secret Taste. Adam is also a lecturer of the creative media courses at the School of Design, the Hong Kong Polytechnic University and the Lee Shau Kee School of Creativity.

In the summer of 2013, his movie The Way We Dance was released and has become a big hit in Hong Kong. Having been screened for 12 weeks, it was very well received both in critics and box office. In the same year, he was invited to be the voice-actor for the protagonist Jiro Horikoshi of Hayao Miyazaki’s animation The Wind Rises. He is now in preparation for his next feature Root of Love and has planned to make the sequel of The Way We Dance.